Wrapping up the Israel posts here with the “miscellaneous” category. Most of these sites we visited on the drive from Tiberias back to Jerusalem, though Jericho we did as a day trip out from Jerusalem. 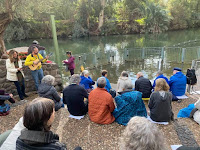 We didn’t go to the actual place Jesus was baptized, but we did have a site that was conveniently set up for dipping and baptizing. We figured it’s all the same river, and the water moves anyway, so no big deal. Though actually, the water didn’t move very much—it was very still and calm. None of this “on Jordan’s stormy banks I stand” nonsense from all the shape note songs I’m used to hearing. The weather was cold and a little drizzly, so only a few people actually did a full immersion, though many more of us dipped and waded a bit. We also held a purification ceremony here, which felt very appropriate. Similar to the Galilee, which is its source, the water here feels very good, and just right somehow, even if cold. 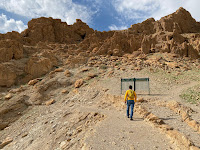 Qumran is where the Dead Sea Scrolls were found, and where a community of Essenes lived, probably being the 2,000-years-ago equivalent of Ananda. There was a cliffside cave we could hike to without much difficulty. (Much less difficulty than the Mount of Transfiguration, to pick just a random example.) It was very small, and more likely used by bats rather than people, but it had a beautiful view of the desert and the Dead Sea, which made it a very expansive place to meditate. 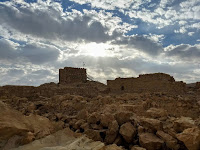 This was less of a spiritual site, except inasmuch as Nivedita and I agreed it would be a fantastic place to take a seclusion if you could get the tourists away. Masada is an immense plateau towering over the desert, where King Herod built a nearly unassailable fortress. It has even more of a top-of-the-world feel to it than the other mountains and cliffs we visited, being so stark and bare. We had to take a cable car up to it because there wasn’t time to hike “The Snake Path,” though I would have liked to do that. 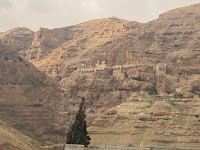 We took another dramatic cable car ride in Jericho, up to the Mount of Temptation, though we still had a considerable hike even after that, to get to the monastery that is apparently just nailed to the side of the sheer cliff face. In a room above the chapel is the rock Jesus stood on when he was tempted by Satan. This is one of the very few rocks that you can’t actually touch, as it’s enclosed in glass. But I ended up having a very nice meditation just down the stairs from it, where the exposed rock of the mountain forms a wall of the chapel, and I figured I really was touching part of the same rock.

There were also tons of visitors from Africa there that day—Nigeria, Ethiopia, Eritrea, maybe other places. It added a very colorful and exuberant energy to have them all chanting as they hiked up the mountain in their various designs of ceremonial robes, and with all their kids. Because there were a ton of kids with them, of all ages though it seemed weighted towards toddlers. I don’t know if it was some sort of spiritual “family camp” or what, but good karma for the kids, getting to visit such holy places at such a young age.

Alright, I think that’ll be it for my pilgrimage posts. For those of you in the area, we’re having a satsang on Friday night at Chela Bhavan, in the Ananda Community, if you want to come hear stories in person from many of the other pilgrims. And if you ever get the chance to go on pilgrimage in the Holy Land, do! 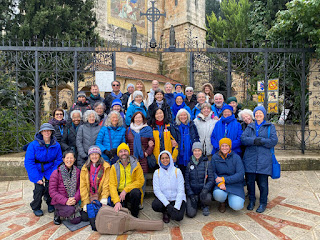