I recently returned from two weeks in the Holy Land. This was actually the first time I’ve ever been on a major, dedicated pilgrimage with an Ananda group, and it was glorious. I’m not going to even try to touch on everything here, but I’ll at least aim for all the highlights (which, honestly, is still most of it). For photos, I’m going to piggyback on sharing Karen’s album, which is larger and better curated than my still-unsorted pile of photos.

But first, a word about rocks.

Israel is full of rocks. Everything is built out of stone. It’s incredible. I can’t imagine building a single wall out of stone, much less a city or a country. And this is true of all the ancient, holy sites we visited. It became almost a joke: “And today we’re going to see... another rock!” And if it wasn’t a rock, it was a cave. But I soon realized that this is absolutely perfect. How many holy relics will last for 2,000 years intact the way a rock or a cave does? It’s an immense blessing to still be able to have such a direct physical connection, to be able to touch the very same stone that Jesus, Mary, and others did all those years ago. So if my writings seem to develop and overly petrological focus, that’s why. It’s hard to convey when you’re not actually there, but these are all much more than “just” rocks.

Church of the Holy Sepulchre
I’m starting this post here because this is where I started my first morning in Israel, pre-dawn, on no sleep. And it’s also the place that felt the most like my spiritual home base for the entire trip. Every morning that we were in Jerusalem I would get up, usually around 4am, make the 20-minute walk over, and spend an hour or two meditating there. 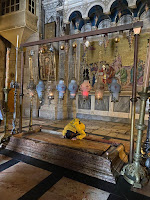 The Rock of Anointing, where Jesus’s body was prepared for burial, was perhaps the most powerful place for me in the conglomeration of sites that make up this giant combo-church. I never cease to be amazed that it is just right out there in the open, in the entryway no less, for all the thousands of pilgrims to touch, and I never went past it without touching it, or sitting with it for a while. There’s a feeling of awe and sanctity there that’s different from anywhere else we visited.

It was hard to actually get in to the tomb itself, due to masses in the early mornings and crowds in the afternoons, but I did manage a few times. My other favorite places were the hole that the cross stood in, and the Chapel of the Apparition. The latter has a portion of the column Jesus was tied to when he was scourged, and which you can also touch. It sounds macabre, but this was also a beautiful spot to meditate. 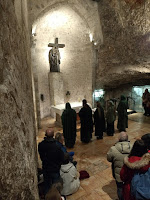 The lowest level contains the Chapel of the Finding of the Cross by Saint Helena. For the first week of our trip, a group called Harpa Dei was in there each morning singing, and it was an absolutely exquisite experience to listen to them.

On two separate mornings we walked the Stations of the Cross, which of course leads up to and has its final stations in the Church of the Holy Sepulchre. The first time we did it, it was early and dark and rainy, which was really just perfect, because you can really be in a different reality then, compared to the hustle and bustle of the daytime. I’ve never “done” the stations elsewhere, as many people have, but it was still stunning to realize that these are actually THE stations. Station V includes a rock, supposedly with Jesus’ handprint in it from when he fell. It’s now worn beyond any recognition as an actual handprint, but the feeling of it is strong enough to be true.

Church of the Pater Noster 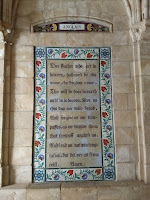 On the Mount of Olives is the Church of the Pater Noster, which is famous for having large, beautiful plaques throughout the grounds with the text of the Lord’s Prayer in 140 different languages. (I even found a few different varieties of Braille, though disappointingly no sign language.) This, I realized later, is kind of a theme around the Holy Land. Many churches have similar displays of many different countries and languages representing their own particular themes, though this one was perhaps the most extensive. It’s sweet to see such a coming together of the whole world in these holy places. 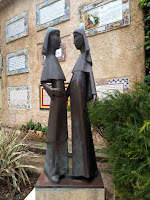 Ein Kerem is a suburb of Jerusalem and has several sites related to John the Baptist. The Church of the Visitation is where Mary and Elizabeth met while both were pregnant, and I always thought the “belly bump” statue was kind of cute. 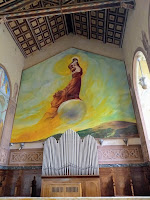 The upper church here has a huge painting on the back wall of Mary as the Lady of the Apocalypse, which isn’t a term I’d ever heard before, and which I still need to learn more about. But it’s a beautiful piece of art, and strikingly modern, especially facing the more traditional depictions over the altar. 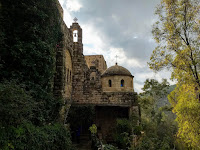 We also got to visit the Monastery of Saint John in the Wilderness (it’s called a monastery, not a convent, though I believe it’s all nuns living there). The main road was washed out, so the bus took us up a winding village road to a place from which we could hike down to the monastery, which made it feel even more remote. The grounds are beautiful, and I would have loved to have more of a tour of monastic life there. But we did get to spend some time in Saint John’s cave, where he spent years in seclusion and meditation. “Long years he spoke only with God,” as Swamiji puts it in the Oratorio.

Bethlehem
Bethlehem is also very close to Jerusalem, but feels farther away, since it’s in the Palestinian territory. Our fantastic Israeli guide Rami couldn’t actually come with us because of this, so we went on Shabbat when he wouldn’t be working anyway. 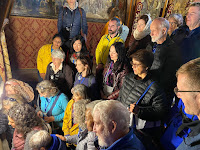 The Church of the Nativity had probably the longest line of anything we went to, and it wasn’t even a big day for them. Passing through the cave and bustling past the official marker of the spot was a little too busy for me to get much of a feel for it. Though I do like how this photo shows us all looking down into the cave, with a light coming up out of it. But we got to explore some adjacent caves at more leisure, and do a bit of singing there. And we were told that the caves were actually artificially separated a few centuries A.D., and the exact spot of Jesus’ birth could have been anywhere in them because no one is certain.

After that we went to Shepherds’ Field, which surprised me because I’d had no idea that there was a specific, known field we could actually visit. It’s a park now, and there’s a church on it, of course, and some caves where the shepherds would sleep at night. And most dramatically, you can turn around from the top of the hill and see the Church of the Nativity on its own hilltop across the way, and realize that that was exactly where the angel pointed them on that very night. Wow.

We also made friends there with a big group of Nigerian pilgrims who liked our singing, and we ended up singing a bunch of Christmas carols together and having a fun time. 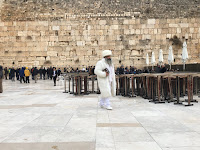 On our first Friday evening in Jerusalem we visited the Western Wall. It’s just heartbreaking to see so many hundreds of people coming together to pray there, but being unable to go all the way to their holiest site on the Temple Mount. But simultaneously there was also such a joyous feeling of celebration. At one point I was standing at the edge of a group listening to the song they were singing, when it suddenly just exploded into an exuberant, bouncing, spinning dance that spread out like a nuclear chain reaction, pulling more and more people into it and sweeping aside tables and chairs as it went. Very fun.
It seems a little ironic given that this was a Christian-focused pilgrimage, and a little silly in its obviousness, but I just loved how Jewish Israel is. I love that everything shuts down on Shabbat so that people can actually observe and celebrate it. I love seeing the ultra-orthodox in their garb that just proclaims their religious dedication, like seeing brahmacharis and nayaswamis around Ananda. As David G put it, for the Jews, this is their Ananda, their spiritual home and family, and for all the difficulties and conflicts and politics, it’s still beautiful.

Further posts to come, as I manage to get them written....
Posted by Tandava at 09:47