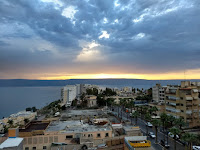 With Israel being such a small country, it was very nice and convenient that we didn’t have to do much traveling. We stayed at the same hotel in Jerusalem at the beginning and end of the trip, and for a stretch in the middle we stayed in Tiberias, right on the shore of the Sea of Galilee, from which most everything else we wanted to visit was easily accessible.

Church of the Beatitudes 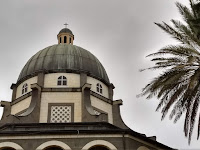 One of the things Asha told us at the beginning of the pilgrimage was to be careful of expectations. If you expect to have a deep experience at a particular site, you may be disappointed, or you may simply try too hard and thwart yourself. And if you write off a particular place as being less interesting, you may miss something. Better to practice being relaxed and open and receptive at all times, and then see what happens. And I did find throughout the pilgrimage that there were times when I felt relatively unmoved compared to what people around me seemed to be experiencing, and there were times when I was very surprised.

The Church of the Beatitudes is a lovely church, located on the site of the Sermon on the Mount, and our group also got to reserve a nice outdoor terrace for an hour of singing and meditation. And that was all fine, but I wouldn’t have had anything particular to remark on about it. The “surprise” I had here was actually just in a 10-foot section of the path the goes along the side of the church and heads towards the terrace. Every time I would walk through it, it felt almost like passing a physical barrier, and I would have a sudden rush of shivers and tears, which would be gone as soon as I moved on. After the first couple times of not expecting it, I deliberately tested it, and it was consistent. I spent a while at the end of our visit just meditating there on the path, and while I still don’t know why that particular little spiritual vortex was right there, I hope I absorbed something from it. 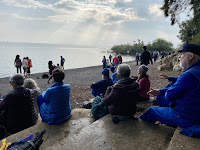 The Church of the Primacy contains—as we are becoming used to—a rock, and specifically the rock on which Jesus was frying fish when he appeared to his disciples at Galilee after his resurrection. This visit was also the first time we got to actually visit the lake directly, since the church is literally right on the shore. The water was so completely calm and still that it was easy to imagine walking on it, though none of us did, that I know of. 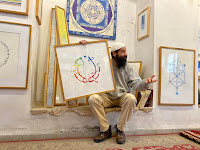 We spent an afternoon in Tzfat, a city that is a center for Kabbalah, Jewish mysticism, and art of all types. The highlight here was visiting the studio of Avraham Loewenthal, a Kabbalah-inspired artist that we all felt and instant and mutual kinship with. I think true mystics everywhere will always recognize each other as spiritual siblings. Many of us bought pieces of his artwork to take home with us. I think it was very interesting also for Rami, our Jewish Israeli guide, to see this interaction, since it gave him a new perspective on what we’re all about to suddenly see such a relatively explicit link between us and a branch of his own religion. 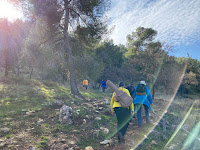 Mount Tabor is a much more serious mountain than any others we visited. The bus can’t go all the way to the top, so we had to wait for shuttles to take us the last mile or so. The shuttles were considerably delayed, so someone suggested that a group of us just walk. That sounded nice and reasonable, and then when someone else mentioned that there was a “shortcut” trail we could take instead of the road, we thought why not? Well, that trail turned out to be muddy, rocky, and nearly vertical in places. Luckily the weather and the landscape were both beautiful, but I should definitely not have been making the trek with a guitar strapped to my back. After about 40 minutes, we made a wrong turn and ended up having to climb a wall only to end up at the wrong church (I wasn’t expecting more than one up there!) but eventually we made it. This picture is from the very beginning of the hike, before we knew what we were in for. We don’t know how the light came out so magically, but the apparent source in the upper left corner is approximately where the top of the mountain would be. Transfigured in light! 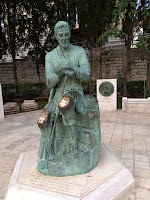 Our time in Nazareth was quite a bit shortened due to our escapades on Mount Tabor. When we got to the Church of the Annunciation, I saw a long line of people waiting to go and see the grotto that was Mary’s home, and I just didn’t want to spend my hour waiting in line. So I went to the neighboring Church of St. Joseph. And this was another case of having a “surprise” experience somewhere that you’re not looking for it. The church was perfectly nice, and the caves beneath it were unremarkable, but when I sat in one of the pews to meditate, I got such a clear sense of Joseph’s presence that it was almost like being introduced to him in person. Joseph mostly just has a supporting role in a story that focuses most dramatically on Mary and Jesus, but it couldn’t have happened without him, and the feeling that I started with was one simply of gratitude to him. And then the feeling I felt coming back from that was of an enormous heart just radiating selfless love and support and strength. I ended up spending most of that hour just basking in that. James came and sat next to me for just a few minutes at one point, but said later that he immediately felt a very strong presence there as well. 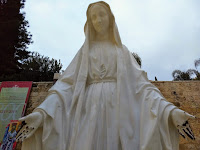 When I returned to the Church of the Annunciation, a few minutes before we had to leave, I found it empty and I was able to just walk right up to Mary’s grotto, though you aren’t able to go inside there. I was actually more moved by the statue of Mary outside. He has her arms outspread, as in many of the statues one sees of her. But she’s large enough that you can hold her hands and look up at her face as if she were your own mother and you still a child. Her hands have had the paint worn off of them by many pilgrims doing just that.