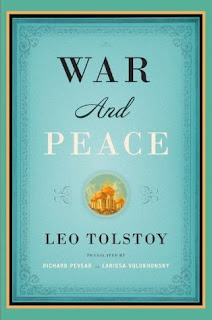 This is a long book so I’m going to let myself indulge in a long review. Consider yourself warned: you can either settle in or skip out.

First, how did I decide to take this particular plunge? Well, basically it all started because I didn’t read (or watch) Game of Thrones. With the show recently wrapping up, it’s been on my mind, because I had really wanted to get into it, just for the huge, complex, sweeping expanse of epic fantasy. But I read the first couple books years ago and, while yes, they were completely engrossing and addictive, they also just felt horrible and made me feel horrible. There are still icky images burned in my mind that I wish I could get rid of. So anyway, I was again wishing it could have been something I liked, and it occurred to me that if I was in the mood for something sprawling and epic, I could finally tackle War and Peace. I didn’t expect there to be any dragons, but still….

The biggest hurdle, aside from the mere decision to read this at all, was deciding on a translation. I picked up the Maude translation first, because the Maudes were friends with Tolstoy who liked their work (though he didn’t live to see this particular translation). But honestly, the anglicization of names really annoyed me, and so I moved on to my other top contenders: Dunnigan, Briggs, and Pevear & Volokhonsky.

P&V are very clear about their approach to translation, in which they really try to nail the word-by-word meaning, and maintain as much of the original sentence structure as possible, even if it seems unusual or awkward. Many translators try to even everything out into what they generically think of as “good writing,” thus losing the original author’s peculiar style (which, in Tolstoy’s case, includes more convoluted sentences and more repetitions than some people are comfortable with). The downside often attributed to P&V is that their translations aren’t as “readable.” Dunnigan seems like a good balance in that respect, being a more traditional translation but maybe not as archaic as Maude, and somewhat more accurate. Briggs is much more modern and takes many more liberties with the text.

So… I started reading all three. Yeah. I would literally read Chapter 1 in each version in turn, then rotate through them all again for Chapter 2, etc. Thank goodness for ebooks, and luckily the chapters are very short. I actually went about 10% of the way through the book like this before I decided to jettison the Briggs. It felt like he was taking too many liberties and I didn’t feel I’d miss him.

At about 25% through, I decided I finally needed to narrow it down, largely because I was becoming so engrossed in the book that I didn’t want to reread chapters anymore but just wanted to keep going (even though it was interesting to see how I would notice different details in the different versions). I dithered a lot, but finally stuck with P&V. I had found by then that I like their style perfectly well, and I can only assume it’s closer to Tolstoy’s. Plus, they have some helpful footnotes. I also found it was relaxing to finally settle into one style and not switch back and forth.

Okay! So I actually read the book! What did I think?

I loved it. I was rather surprised, really, because I thought it would be the sort of book that we all know has merit but is still a bit of a slog. Instead, I found it to flow along beautifully. If you had just told me the subject matter, I would have expected it to be boring, but the actual experience of it was as an absolute page-turner. I can’t even say precisely why, maybe because I didn’t want to analyze it as I went along. But it was great, and I continually wanted to know what happened to everybody.

Speaking of “everybody,” I’ve heard the complaint that there are too many characters to keep track of. I didn’t feel that at all. Though there are lots of people, the core, primary characters are kept to a perfectly reasonable number. Also, Tolstoy uses a leitmotif sort of technique, having short, characteristic descriptions for many of the characters that are repeated many times, e.g. referring to someone’s “small, white hands,” or “downy upper lip,” etc. Far from being tediously repetitive, this actually feels completely natural, and instantly conjures up the right person in your mind, even if it’s been many chapters since you saw them last.

(I also enjoyed all the variations on people’s names—formal name, intimate or family name, French name, patronymics, etc. Once you get the hang of it, it’s not confusing. Makes me wonder what all my names would be.)

Also along the lines of describing people, Tolstoy takes a very expansive, non-judgmental view, throwing in positive and negative qualities alike for everybody, with seeming disregard to leading us to a particular opinion. Because, of course, everybody is a complete mix of qualities in real life. He will often describe thoughts and behaviors very sweepingly, in terms of someone manifesting something that “everybody” does. Again, if I just try to say what he’s doing, it sounds bad, overly generalizing or stereotyping, but that’s not how it comes across. I find these are always statements, as broad and sweeping as they are, that I can actually relate to, and therefore they ring true not just to the person described, but to humanity.

I’ve heard Tolstoy described as a “miniaturist,” which sounds ridiculous in the context of such an enormous book, but it’s true. He has so much ground to cover that in every moment he has to zero in on just the exact right details to make a character, event, or image “click.” In that sense, it’s a good study for poetry—how to notice the perfect individual details and focus on them.

Historically, it was interesting to read. I thought I had a general understanding of Napoleon’s march to Moscow, but it turned out I really didn’t, so I learned a lot about that. Tolstoy also gets into a lot of what you might call the “theory” of history—analyzing what historians typically take as cause and effect and why it’s inaccurate, and offering his own take on it, which the whole book is really an attempt to embody (though with the understanding that nothing finite could really do so).

Often these sections begin to sound rather fatalistic. But I find that they don’t feel that way, perhaps because his viewpoint just feels so expansive. It’s really the cosmic interweaving of karmic cause and effect that he’s describing, which we are each subject to but also an integral part of. And it’s good to understand our place in it all.

I’m going to say a few more specific things about the story here, so if you care about spoilers for a 150-year-old book, here they are. In particular, I’m going to talk about deaths and marriages.

First of all, not everybody dies. Yay! And those who do die don’t have gratuitous, GoT-style, kill-off-everyone-you-like deaths (I think I was subconsciously worried about that). Of the major characters who die, I think all of them have some sort of transcendent, uplifting experience shortly before their death. This is beautiful, because of course we know that everyone ultimately dies, but Tolstoy always shows us how it can be a positive transition, with everyone heading in the right direction. The next step in that direction is different and appropriate for everyone. (So some might not necessarily seem “transcendent,” but relative to where they are, it’s uplifting to some degree.) I also noticed that Tolstoy never lets us see the actual moment of death directly, as if death itself isn’t as significant as the personal transformation he does describe. Let’s look at the primary examples.


As for the marriages, Natasha and Nikolai are the ones we’re following the most in this respect over the course of the whole book. Honestly, I was a bit annoyed with them much of the time, with Natasha for so easily falling in love with everybody, and for Nikolai for so easily falling out of love (especially, repeatedly, with Sonya). I was really worried when he started getting interested in Marya, who I felt deserved much better (as did Sonya, but at least she knew what she was involved in). So I was actually pleasantly surprised when Tolstoy managed to bring us to the final pairings with everybody matured enough to be believable and to leave me content and satisfied in both their cases. Sonya is the only one I’m really sad about, and I wish things could have worked out better for her. I guess she was never enough of a “main” character to get more of her own arc, but I always felt she should have been.


Swami Kriyananda talks about having an impression of the spiritual light emanating from the works of great authors. He never mentioned Tolstoy in that context, but in reading War and Peace I feel for the first time that I’ve experienced a bit of what he’s referring to. Throughout the book I very often had a sense of a sort of white-blue glow behind everything, which I feel is perhaps Tolstoy’s consciousness guiding the whole experience. This book is truly remarkable.
Posted by Tandava at 20:54 No comments: