I'm leaving today for the "Living with Spirit" retreat up at Ananda Village. So for the next two weeks I'll be camping, meditating, doing yoga, taking classes, experiencing life in a spiritual community, and doing other fun things. Oh, and hoping I don't miss my first tomatoes, though Cathy will be looking after them for me. See y'all mid-July!
Posted by Tandava at 08:09 No comments:

I just finished listening to Shantaram, by Gregory David Roberts, narrated by Humphery Bower, and I have to say I spent every one of those 43 hours completely enthralled with his voice.

First of all, he's Australian (appropriate for the first-person protagonist of the book) so everything is delightfully accented, even just the "base" narration. But it's the character voices that always really sell me on a good narrator. Most of the book takes place in Bombay, so there are umpteen different Indian characters, all with distinguishable, recognizable voices. Aside from that, though, there are numerous characters from other countries, with accents as diverse as French, German, Spanish, British (London and Liverpool versions), Canadian, American, Iranian, Pakistani, and Afghan. And as if juggling all that weren't enough, he also handles cases like British-educated Afghan, New York Pakistani, and an Australian faking an American accent while speaking Hindi. The guy is a genius.

And even beyond the accents, the overall narration is just exquisitely done. Every little shading and coloring of emotion and meaning is conveyed perfectly in the intonation. Not too much -- I've heard narrators that overdo it -- but just right. This goes both for matching explicit descriptions in the text and for applying his own interpretations to the rest of it. There have been a number of times when I could tell that I would have read something in a very different way in my head, but that Bower's version worked much better.

So if you're a connoisseur of good narrators, definitely listen to this. (Or I expect any of the other books he's read would be excellent as well.)
Posted by Tandava at 13:19 No comments:

I think peas really have to be just about the best plants ever. Lacey gave me a couple small Cascadia Bush Snap Peas about a month ago, and I got to pick and eat the first one last night. I love these little plants. This is how awesome they are:
I mean, really, what more could you want?
Posted by Tandava at 11:08 1 comment: 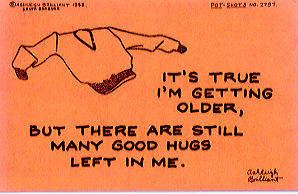 (Potshots #2797, by Ashleigh Brilliant.)
Well, it's a new year and a new decade for me today. Thirty still sounds like too big a number, but I've also kinda been looking forward to getting out of all the late-20s nonsense of the past few years. So I'm assuming it'll be good. :-)

I got to do several fun things this weekend, starting back on Friday with dinner and birthday stuff with Mom, Lacey, and Cathy, before going out waltzing. Then a Waldon gathering on Saturday (more of a general family reunion, but family + apple cobbler + double chocolate brownies is close enough to a birthday celebration for me). Then yesterday Cheryl and I made one of my weirder ice creams (about which, more here) and other amusing sillinesses.

So today, the actual day, will probably be a bit different. But I always like to make sure I get some quiet, introspective time around my birthdays, to think and write and such. And to plant a lot of new seedlings in my garden. And to work my way through the leftovers of five different, excellent desserts from this weekend. That'll make for a good day.
Posted by Tandava at 11:06 1 comment: